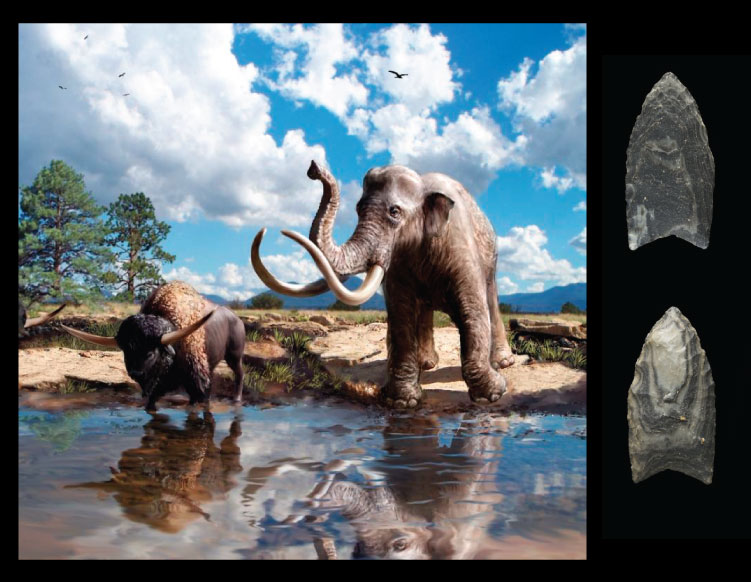 The Paleoindian period refers to late-Pleistocene and early Holocene occupations in North America, and encompasses the Clovis, Folsom, Agate Basin, and Cody cultures.

Clovis dates to about 11,500 -10,900 radiocarbon years BP, or about 13,325 – 12,975 calendar years ago. During this period the northern latitudes of North America were covered with vast sheets of ice, and the Southwest was a mosaic of pine woodlands and desert scrub. Clovis period people hunted large mammals, including the mammoth, with the distinctive stone point known as the Clovis point. Clovis sites in the Southwest are famous for megafaunal remains, and include Lehner, Naco, Escapule, and Murray Springs in Arizona, and Mockingbird Gap in New Mexico. More recent discoveries in Texas, however, attest to both Pre-Clovis people, and to Clovis lifestyles both less mobile and less megafauna-dependant than previously thought.

The Clovis culture is the most well-known Paleoindian culture in the Southwest. Clovis presence in the archaeological record is most often recognized primarily by distinctive fluted projectile points (stone spear tips) like the one pictured from Wupatki National Monument.

Clovis people lived during the Pleistocene Epoch an average of 13,000 years ago. As the pictured reconstruction of Pleistocene Wupatki National Monument (by Victor O. Leshyk) shows, during this period, now-extinct large mammals called megafauna roamed the Southwest. Clovis people hunted these animals, including mammoths, as well as smaller game, and undoubtedly supplemented their diets with plant foods like berries and tubers.