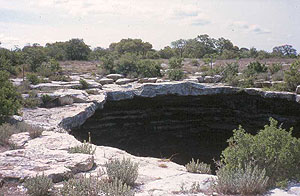 Edwards Plateau is located in western Texas and is the southernmost extension of the Great Plains. Bounded by the Pecos River to the west and the Colorado river to the east, Edwards Plateau also borders the Llano Estacado to the north. Although a plateau, much of region is dissected with steep canyons, and caves are common.

Temperature: Highest temperatures are on the southwest portion of the plateau, and the coldest are on the extreme northwest portion, along the Edward Plateau’s border with the Llano Estacado. Summer highs near 100 degrees F are common, as are winter lows in the 40s, with rapid temperature swings of as much as 50 degrees F possible.

Geology: The Edwards Plateau lies entirely on limestone bedrock and was a source of high-quality chert, or flint, for prehistoric people. Edwards Plateau is often called the “Texas Hill Country” because the highly erodible limestone has been cut by streams and rivers into a topographical landscape of steep hillsides and valleys. Caves are also common.

National Parks: Big Bend and Rio Grande are nearby.