Who created the rock images at Walnut Canyon? The rock images were created by the Indigenous cultures traveling through or living in Walnut Canyon. People have been present in the Walnut Canyon area for close to 13,000 years, and this period has likely encompassed many different cultures. The descriptions below are those commonly used by archaeologists; Native Peoples often use different methods for describing them.

Paleo-Indian (~13,000 to ~9,000 BP (Before Present)): The Clovis culture is the earliest well-defined material culture in the Americas, though excavations over the past few decades have uncovered sites that likely pre-date the Clovis culture. Their descendants created the cultural diversity of North and South America, from the coldest reaches of the northern tundras, to the dense Amazonian jungles, and the plains of the American West. But archaeological investigations still strive to understand where the culture came from and how it developed. Evidence of Clovis people is usually only associated with their specific style of creating stone tools – usually large spear points used to take down massive mammoths,mastodons, bison, and other megafauna of the Pleistocene. While finding the remnants of these ancient gatherers-and-hunters is difficult, there have been several discoveries of Clovis points near Walnut Canyon. Most notably, several Clovis points were discovered in Wupatki National Monument, just 25 miles northeast of Walnut Canyon.

Walnut Canyon’s environment would have provided game, resources, and shelter to these nomadic peoples. The steep gorge might have been an ideal spot for hunters to force large herds of animals over the cliff, as this was a common technique for hunting large game during that time (though no direct evidence for this practice has been found yet at Walnut Canyon).

During the end of the Pleistocene, the climate grew considerably warmer, and along with this came changes to the animals and plants available to prehistoric peoples. These ancient hunters started making smaller projectile points that could be used on the prehistoric bison that now roamed over much of the American southwest. There is evidence that these Paleoindian cultures that followed the Clovis were utilizing Walnut Canyon either as temporary shelters, or as a place to hunt the many animals in the biodiverse area. During excavations in Walnut Canyon, archaeologists found what is probably an Eden point, dating to 10,000 years ago. This point would probably have been used to hunt the mule deer or elk that frequented the canyon.

None of the rock images in Walnut Canyon can be unambiguously identified with the Paleo-Indian cultures. In fact, there are no solidly-identified Paleo-Indian rock images anywhere in the Americas, only a few very ambiguous figures that people have attempted to identify as representations of extinct animals of the Pleistocene like mammoths and camels.

Archaic (~9000 BP to ~550 CE): After the extinction of large game animals like mammoths and mastodons, the Paleo-Indian gatherer-and-hunter cultures in the Southwest shifted to a lifestyle and culture, known collectively as Archaic period. The Archaic culture is primarily identified by their stone dart points, which were much smaller than the Paleo stone points. Archaic stone points are throughout Walnut Canyon, but the points only generally diagnostic of culture and time.

However, in a cave near Walnut Canyon, several split twig-figurines were found. These split-twig figurines are willow twigs shaped into animal effigies, which were carbon-dated to around 3500-4000 years ago.

Once again, Walnut Canyon does not contain any rock images that are clearly identifiable as Archaic. Some have suggested that sites with multiple parallel scratch marks may be Archaic, but this identification is not definitive.

Sinagua (~550 CE to 1300 CE): In the Flagstaff and Verde Valley areas, archaeologists have identified pithouses and other structures built by early agriculturalists, dating to around 550 CE, and extending to roughly 1300 CE. Harold Colton, the founder of the Museum of Northern Arizona, assigned these cultures the name “Sinagua,” from the Spanish “without water.” Sinagua was a reference to the original Spanish name for the San Francisco Peaks that tower over the Flagstaff area, “Sierra Sin Agua.” The Spanish were surprised that such large mountains did not have large permanent rivers flowing from them. Early archaeologists further subdivided Sinagua culture into the Southern Sinagua, concentrated in the Verde Valley south of Flagstaff, and the Northern Sinagua found in the general Flagstaff area. The Northern Sinagua built and inhabited the cliff dwellings in Walnut Canyon National Monument in the 12th-century CE. 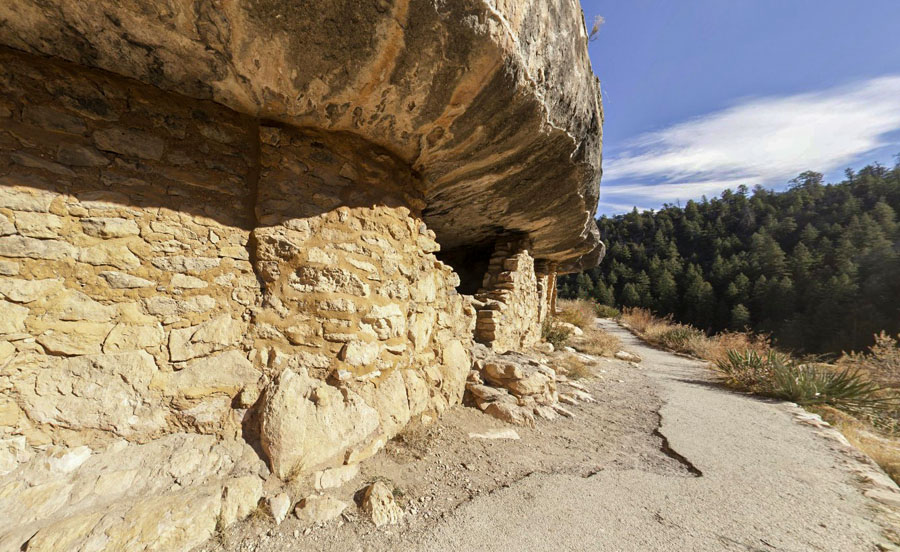 As inhabitants of some of the earliest cliff dwellings in the Southwest, the cliff dwellers at Walnut Canyon were extremely knowledgeable of how to cultivate maize, beans, squash, and other plants that they farmed on the rim tops surrounding the canyon. They also gathered wild food resources and hunted game in and around Walnut Canyon. With approximately 180 or more inhabitants living there for several generations (between 1100 CE and 1220 CE), Walnut Canyon was likely an ecologically diverse and culturally rich center within the Northern Sinaguan culture.

While they cannot be positively attributed, a number of pictographs in Walnut Canyon appear similar to those created elsewhere by Pai peoples, including those at WACA 180 and WACA 500.

Apache (~1400? CE to present): The Apache are an Athabascan-speaking culture, placing their origins somewhere in northwest America.  A small mount of archaeological material can be identified as early Apache culture with certainty. As gatherers-and-hunters, most of the Apache goods were perishable and they burned the possessions of the deceased. The date of their arrival in the American Southwest is unclear, but was probably around the 13th or 14th century.

One rock image site in Walnut Canyon (WACA 268) had several Apache potsherds (broken pottery), suggesting that the rock images might be Apachean in nature. Another rock image site has many elements in a style called “Verde Incised,” common in the Verde Valley and believed to be associated with Apache culture (WACA 462).

Navajo (~1400 CE? to present): Like the Apache, the Navajo are an Athabascan-speaking culture. Some ancestors of the Apache and Navajo arrived from the northern speaking Athabaskan languages related to those of Western Canada and Alaska and about 70-80% of their vocabularies overlap. The Navajo are one of the largest Native American nations, occupying a large reservation in the Four Corners region of the American Southwest.

No unambiguously-identifiable Navajo rock images have been found in Walnut Canyon, but given their active presence in the area over the past 600+ years, it is quite possible that some of the rock images in the canyon may have been created by them.