River running in the Grand Canyon began more than 150 years ago with John Wesley Powell and, through the efforts of early adventurers such as the Kolb brothers and famous river runners like Norm Nevills and Georgie White, has become an experience sought by thousands of Grand Canyon visitors every year.

John Wesley Powell led two expeditions through the Grand Canyon, one in 1869 and on in 1871-1872.  Powell and crew made the first trip on four small wooden boats—the Emma Dean, Kitty Clyde’s Sister, No Name, and Maid of the Canyon—leaving Green River, Wyoming on May 24, 1869, and after nearly 930 miles (1,500 km) of river travel down the Green and Colorado rivers, reaching the mouth of the Virgin River on August 30, 1869.

The second Powell expedition ready to depart from Green River, Wyoming, May 22, 1871.

The second expedition in 1871-1872 retraced portions of the first, traveling by river from Green River to Kanab Creek on the same boats. One of the crew members on the second expedition was Powell’s first cousin “Clem,” who keep journals throughout (read one here).

One boat, the Nellie Powell, was left to winter in Lees Ferry and years later, after being abandoned in a field, was nearly lost entirely in a brush-clearing fire.  In 1938, however, the National Park Service retrieved the one remaining fragment, and this remained on display at Grand Canyon National Park until 1997.  Learn more… 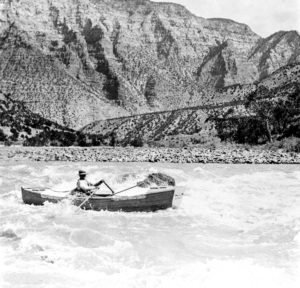 The first group to float through the Grand Canyon for pure sport were the members of the Stone expedition.  The party consisted of Julius Stone, financier; Raymond Cogswell, photographer; C.C. Sharp, who made only part of the journey, leaving the party at Hite, Utah; Seymour Dubendorff; and leader of the party, Nathan Galloway, who had previously designed a flat-bottom skiff and developed the stern-first rowing technique still used by whitewater boaters.

Despite only Galloway (pictured) having prior river experience at the outset, the party successfully navigated the Green and Colorado rivers from from Green River, Wyoming to Needles, California in 1909.   Dubendorff Rapid, Stone Creek, Galloway Canyon, and Cogswell Butte are named for the members of the expedition.

The Stone expedition took four Galloway-style boats on the trip, including the Stone, shown here.  Members wore cork safety vests, one of which is preserved in the Grand Canyon National Park Collection.  Learn more…

The “Stone,” one of four Galloway-style boats used on the Stone expedition in 1909. 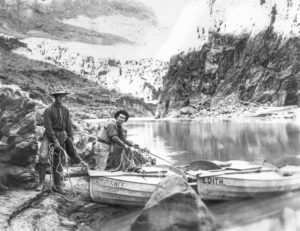 In 1911-1912, Emery and Ellsworth Kolb—two of the earliest full-time Euroamerican residents of the South Rim of the Grand Canyon—rowed the Edith and the Defiance through the Grand Canyon, filming and photographing their adventures.  The brothers showed their film daily at their South Rim studio, and Ellsworth published a book about the trip.

Both the Defiance and the Edith are preserved in the Grand Canyon National Park collection, The Edith, shown below, was named for Emery’s daughter.  A replica of this boat was built by Fretwater Boatworks of Flagstaff, Arizona, and then taken down the Colorado.  According to blogger and photographer Gaelyn Olmsted (link opens in new window), the builder claimed the run was fun, but that the boat handled poorly and he was surprised the Kolbs made it at all. 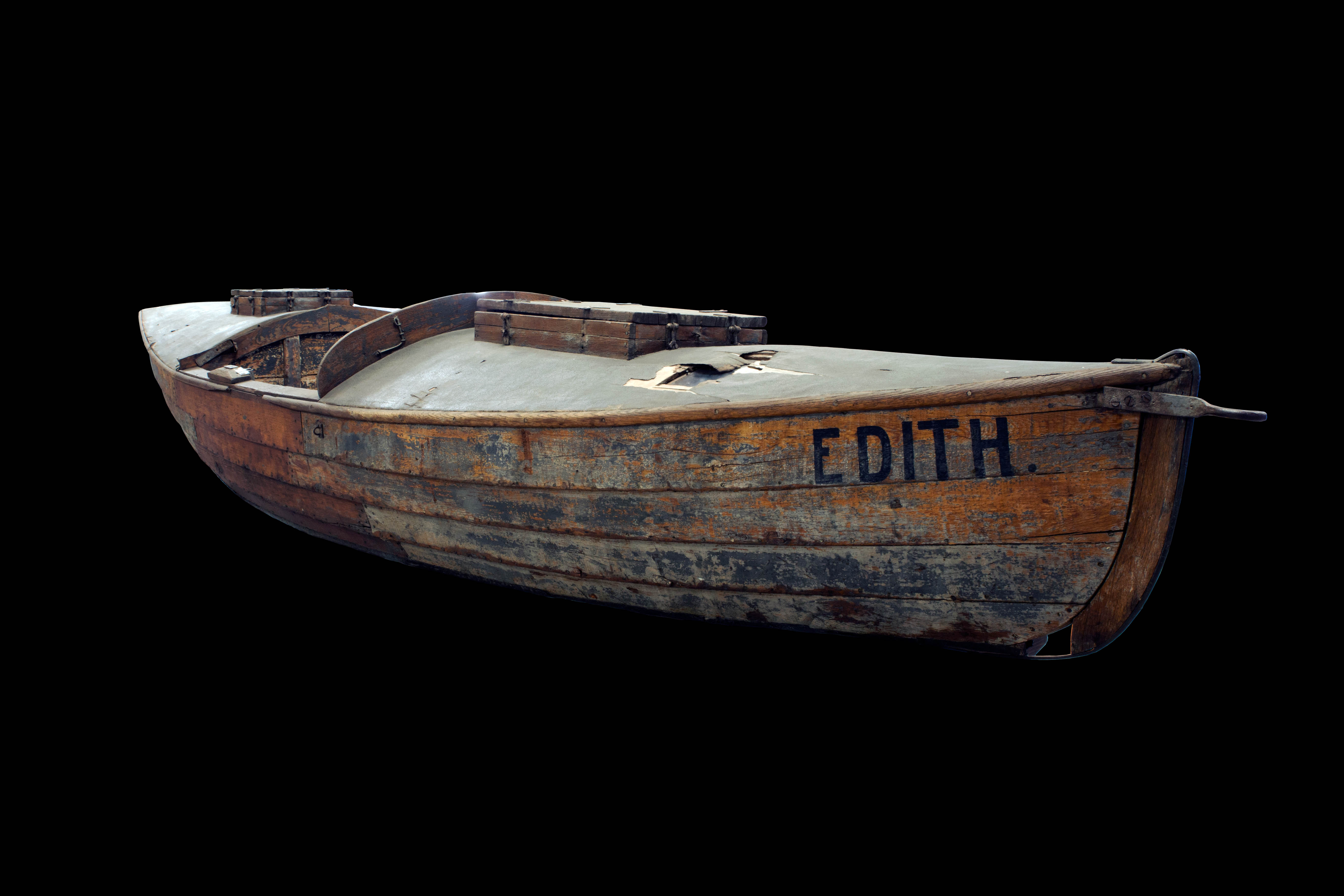 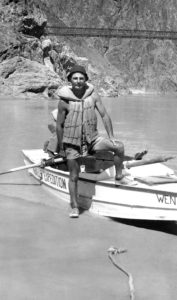 Norman “Norm” Nevills, shown here near the mouth of Bright Angel Creek in 1947, pioneered commercial river running on the San Juan and Colorado rivers, leading expeditions in his specially designed Cataract boats.  Wider than the Galloway-style boats used by earlier expeditions and built of marine plywood, Cataract-style boats were used by river running outfits until 1969, when inflatable craft came into use.

Norm led his first expedition down the Colorado River in 1938, with passengers Dr. Elzada Clover, a botanist, and her assistant Lois Jotter the first women to successfully make the journey through the Grand Canyon.

Prior to his death in 1949, Norm led an additional six trips through the Grand Canyon, a record at that time.  Nevills Expeditions continued on, first as Mexican Hat Expeditions, and now as Canyoneers. 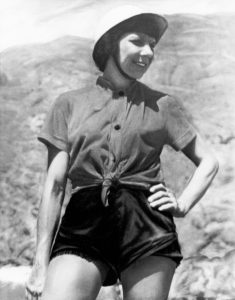 Georgie White, born Bessie DeRoss and pictured to the left ca. 1957, really commercialized river running in the Grand Canyon.  Capitalizing on army surplus, Georgie strapped three inflatable boats together and attached an outboard motor to make her “triple-rig raft” which was capable carrying large groups safely (and funly) down the river.

Georgie began taking paying customers down river in 1955.  She called her outfit Georgie’s Royal River Rats, and by 1961, she’d taken more people down the Colorado than anyone prior.

Georgie’s last run through the Grand Canyon was in 1991.  In 1992, she died of cancer, at the age of 82. Biographer Richard Westwood has documented her fascinating life in the book Woman of the River: Georgie White Clark, White-water Pioneer (1997, Utah State University Press), and Georgie Rapid is named for her. 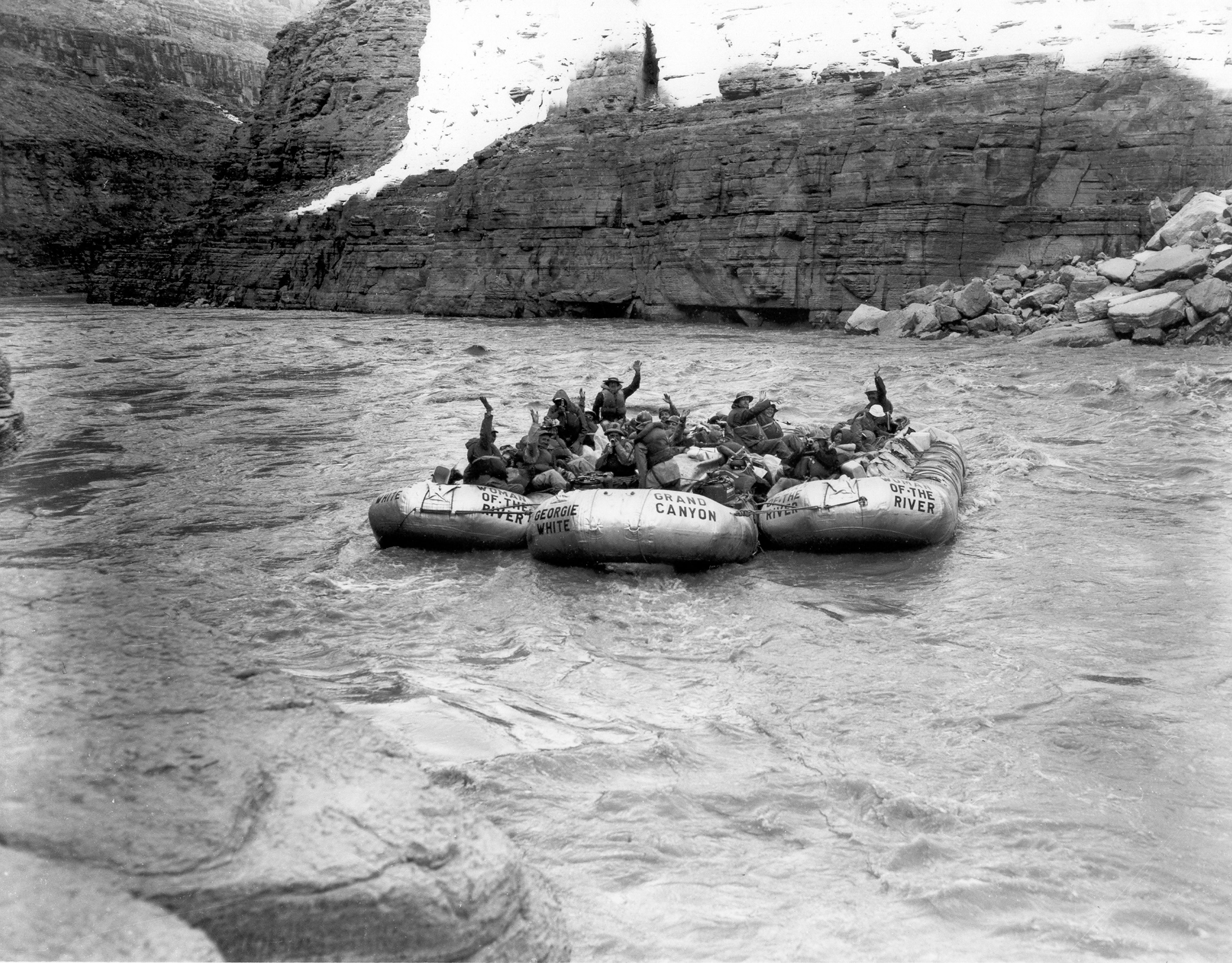 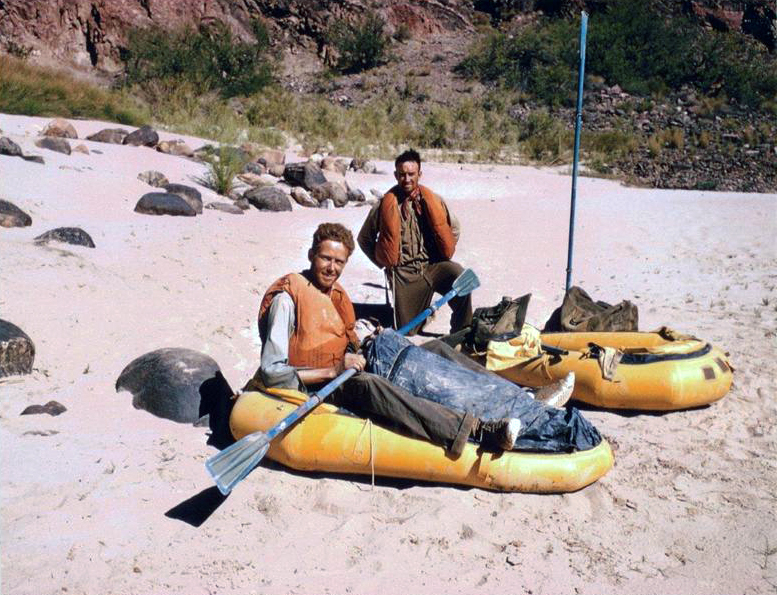 In 1956, Frank Moltzen and friend Neal Newby ran the Colorado River on single-person life rafts barely bigger than a bathtub.  Setting off from Lees Ferry on August 16th, the duo promptly ran into trouble—from leaky boats, low water, and bad rapids, it only got worse—their boats flipped and one was lost temporarily, their equipment was lost and damaged, food supplies ran low, and both men were badly bruised by the river long before their planned exit.  Worried, the two attempted to hike out at both Nankoweep and Hance, but were stymied by dead-end trails.  Returning to the river, Moltzen and Newby finally reached Phantom Ranch on September 1st, many pounds lighter and with only a few dehydrated carrots left to spare.

Years later, after Frank’s passing, Neal wrote an account of their trip, available as a PDF (625 KB) here… 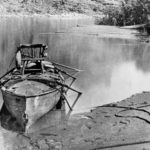 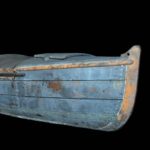 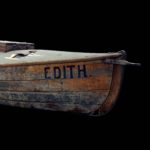 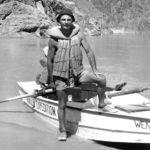 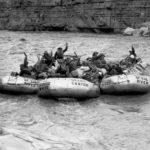 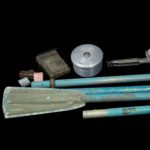 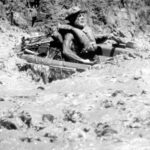