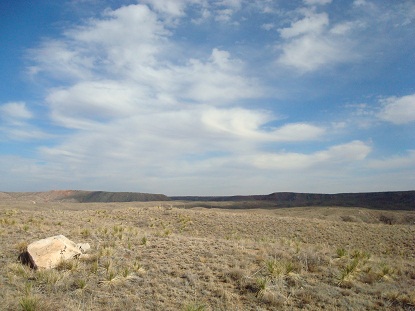 Precipitation: The eastern Llano Estacado average is 58 cm (23 in) per year. The northwest portion of Edwards Plateau (the southern margin of the Llano Estacado) receives as little as 38 cm (15 in) in a year. Most of the precipitation the Southern High Plains does receive is lost to evaporation.

Temperature: Summer temperatures above 85 degrees F are not uncommon, nor is snow in the winter.

Geology: The Llano Estacado is a plateau bounded on the north, east, and west, by cliffs. The underlying stone of the Llano Estacado is Ogallala Formation limestone capped with caliche. The caliche is the result of both water and wind, which have also formed sinks and depressions, or playas, in the surface of the stone.