The Grand Canyon was first set aside as the Grand Canyon Forest Reserve in 1897.  In 1906, portions were also declared as a federal game reserve, and in 1908, President Roosevelt proclaimed Grand Canyon National Monument.  The US Forest Service managed the monument until it became Grand Canyon National Park in 1919, when the National Park Service (NPS) took over management duties.  NPS rangers and other park employees worked hard from that point to keep up with infrastructure and interpretative needs, a task that was aided in the 1930s and early 1940s by the labor of the Civilian Conservation Corps (CCC).

Miner Tillotson began his service at Grand Canyon National park as the resident engineer in 1920.  In 1927, he became superintendent of the park, remaining in that position until 1939, when he was appointed director of NPS Region 1 in Virginia.  He later transferred to Region 3 in Santa Fe, where he remained until his death in 1955. 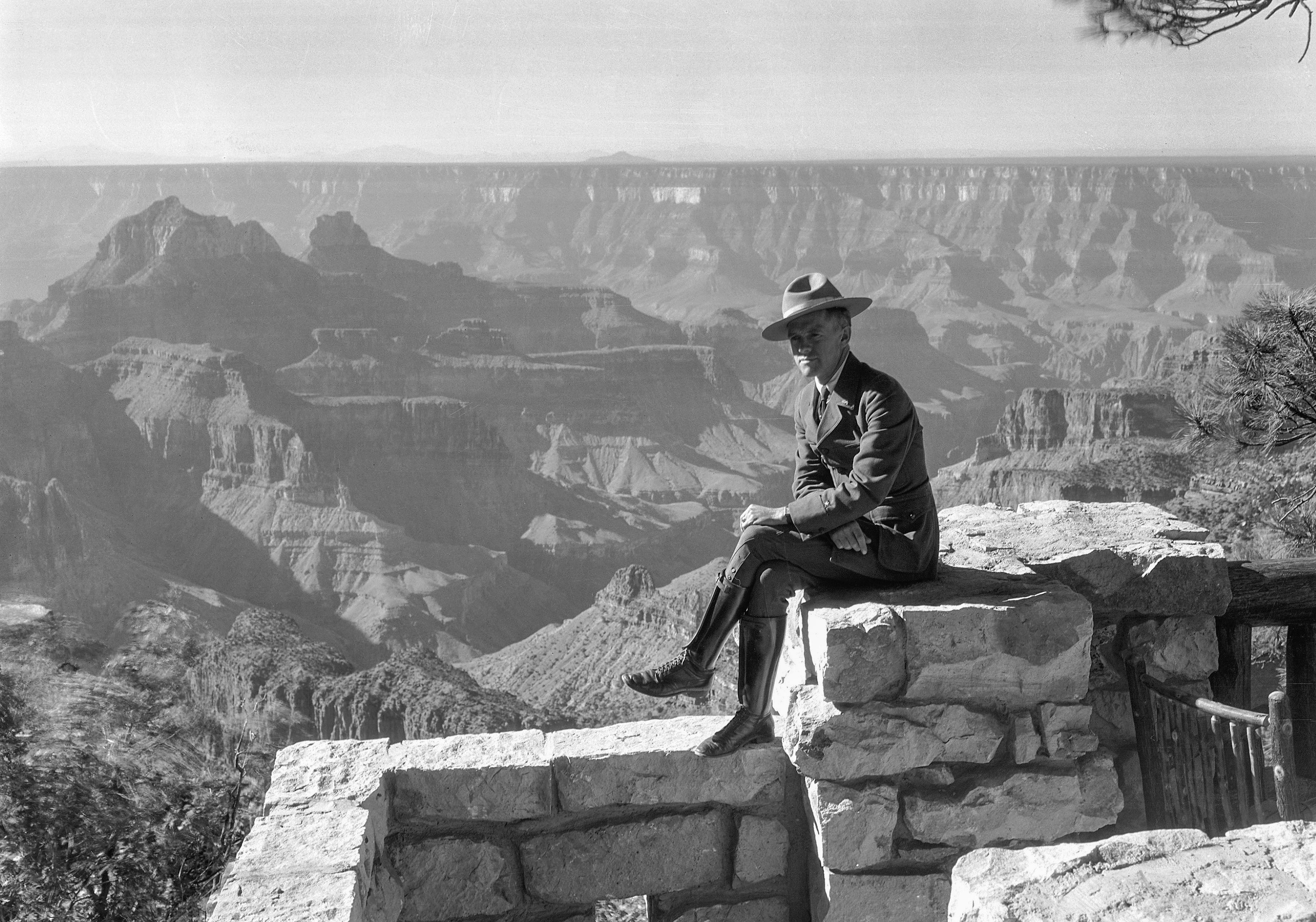 During his tenure at Grand Canyon National Park, Tillotson supervised the construction of several major sanitation, road, trail, and bridge projects, including the completion of the North and South Kaibab trails, the Colorado River, Upper Ribbon Falls, and Clear Creek trails built by the CCC, and the installation of the trans-canyon telephone line connecting the North and South rims.  In addition, Tillotson oversaw the construction of the new park headquarters, the relocation of West Rim Drive, and the addition of village housing and the hospital.  He also ended the practice of killing predators in the park.

Tillotson co-authored the book Grand Canyon Country with Frank J. Taylor in 1929, and wrote numerous other published and unpublished manuscripts on the Grand Canyon and National Park Service history.  Both Miner and his wife Winifred, are buried in the cemetery on the South Rim. 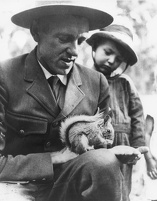 Glen Sturdevant was Grand Canyon National Park’s first Park Naturalist and the creator of the Grand Canyon bulletin Nature Notes.  Appointed in 1925, Sturdevant avidly pursued the scientific and natural wonders of the Canyon, engaged visitors through nature walks and lectures, and began what would ultimately become the interpretive program at the park.

While in his role as Park Naturalist, Sturdevant kept a handwritten log documenting his daily activities, meetings, lectures, and Nature Notes preparations.  His journal spanning January 1st, 1926 through June, 1927, is available to read here (PDF  14.7 MB).

In 1929, Sturdevant and fellow ranger Fred Johnson drowned when their boat was swept into Horn Creek Rapid on the Colorado River.  Sturdevant is buried in the Grand Canyon Cemetary, but Johnson’s body was never recovered.  Both, however, are remembered in Park place names, including Sturdevant Canyon, Sturdevant Point, and Johnson Point. 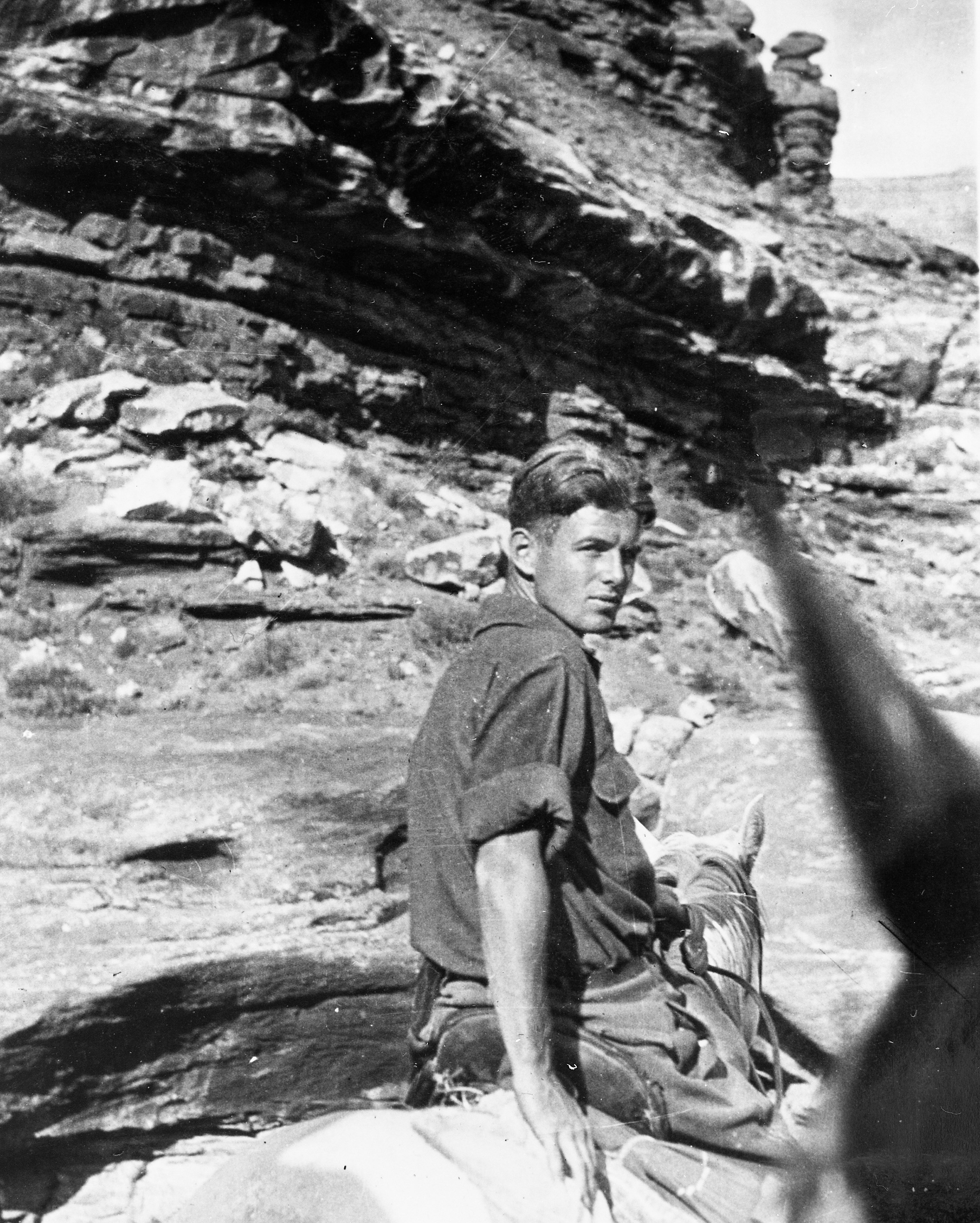 Eddie McKee, shown here in 1929, joined the Park Service served as ranger-naturalist and editor of Nature Notes after the death of his predecessor Glen Sturdevant.  McKee continued to build the Grand Canyon’s interpretive program and founded the Grand Canyon Natural History Association in 1932, which continues today as the Grand Canyon Association.

In 1938, because of an NPS policy that prevented rangers from staying at one park for more than 10 years, McKee left Grand Canyon National Park.  From there, he went on to be assistant director for research at the Museum of Northern Arizona,  chair of the department of Geology at the University of Arizona, and research geologist for the US Geological Survey.

In 1957, Northern Arizona University awarded him an honorary doctorate and he expanded his research to every continent but Antarctica.  Upon his death in 1984, McKee’s ashes were interred at the Grand Canyon Cemetery. 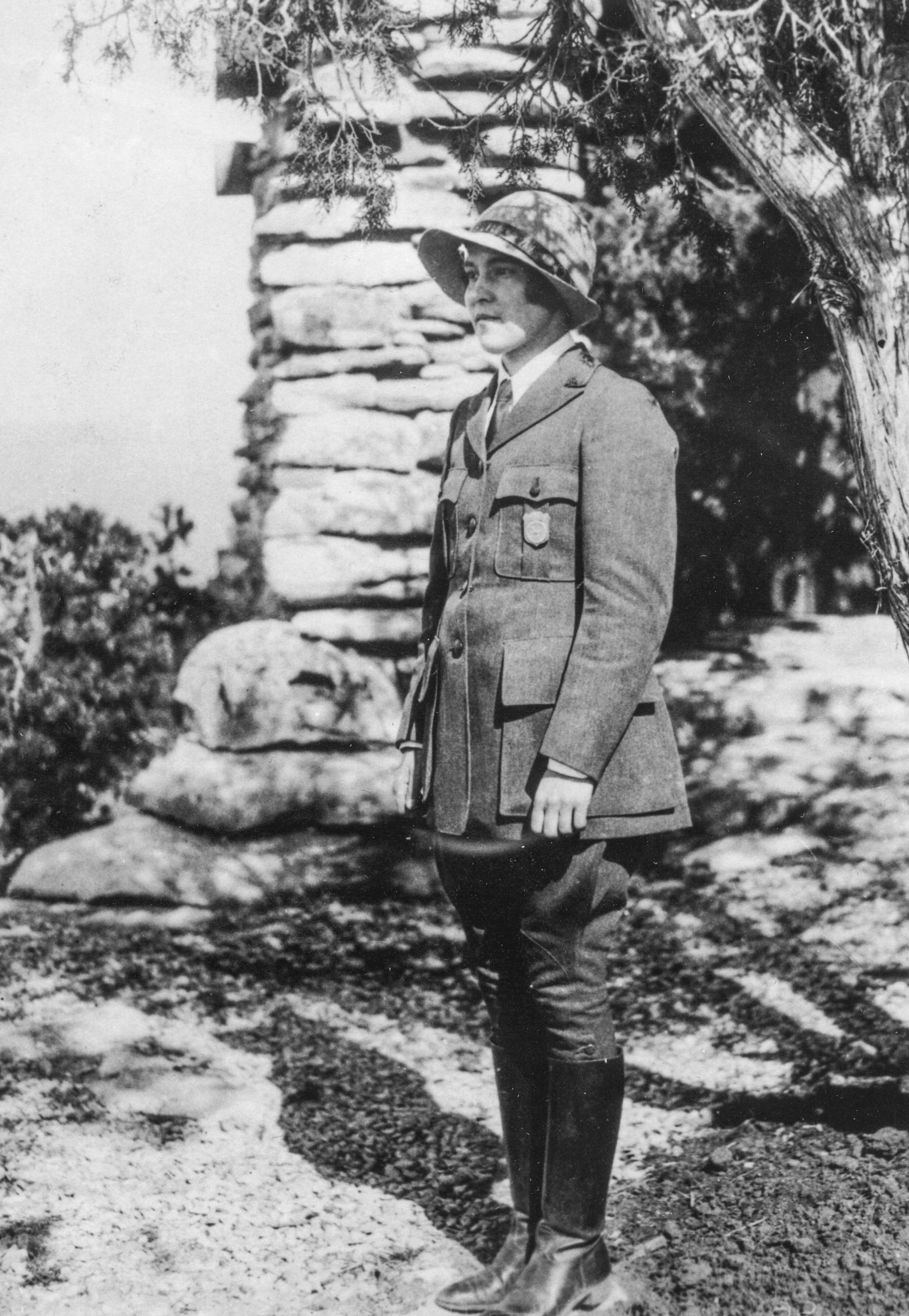 Polly Mead, shown here ca. 1930, was the first female ranger at Grand Canyon National Park.  Her first trip to the Grand Canyon was in 1927, while she was studying botany at the University of Chicago.  She spent the next two summers conducting field research near the North Rim, and completed her thesis on the causes of the abrupt tree line on the Kaibab Plateau.

Polly applied first to the US Forest Service, but was denied, as they did not hire women as ranger-naturalists.  She then applied to the the same position on the South Rim with the National Park Service, and was accepted in 1929.  Polly then served as ranger-naturalist—the first in Grand Canyon and the second in all of the Park Service—until her marriage to Preston Patraw in 1931.

Polly’s uniform was the same as the men’s, but had to be custom-fit, as the Park Service did not have or make ranger’s uniforms for women at the time.

Spike Oakes began working with the CCC in 1932 at Sequoia National park in California.  From there, he went to Death Valley National Monument and other CCC locations in California until 1940.  The following year, Spike was appointed as a park ranger in Death Valley, and he later served as chief ranger at Shasta Lake National Recreation Area.

In 1956, Oakes moved to Grand Canyon National Park, and then in 1957, to Tonto National Monument, where he served as Superintendent until his retirement in 1965.

Spike’s early ranger boots have been modeled in 3-D here.

These badges and buttons are from various ranger uniforms from Grand Canyon National Park. 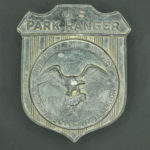 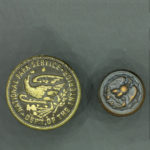 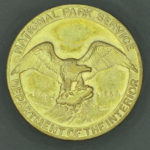 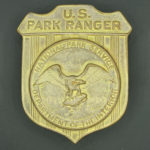 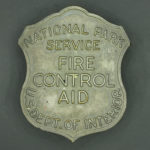 The first CCC company to work in the Grand Canyon was Company 819.  Arriving on the South Rim in 1933 and remaining until 1942, Company 819 was responsible for the construction of a stone wall between El Tovar Hotel and Bright Angel Lodge, improvement of the Bright Angel Trail, landscaping in the Grand Canyon Village area, and construction of the Community Building.  They also built the stairs leading up from Kolb Studio, the Navajo Street wall, bridges, roads, warehouse buildings, residences, water reservoirs, fences, and telephone and power lines.

Another company—Company 818—worked on the North Rim during the summers of 1933-1936, and moved to the canyon bottom during the winters.  Work on the North Rim consisted of installing fences, phone lines, and water and sewer lines, as well as building stone walls, maintaining the North Kaibab Trail, landscaping, and a variety of other projects.  Company 818 also completed the Colorado River Trail, which is considered to be the most difficult trail ever built within Grand Canyon National Park.  Their monthly newsletter documented not only their work efforts, but also included comics, boxing rules, and a variety of other information and entertainment.  ~The December, 1935 issue can be read here (PDF 1.66 MB). 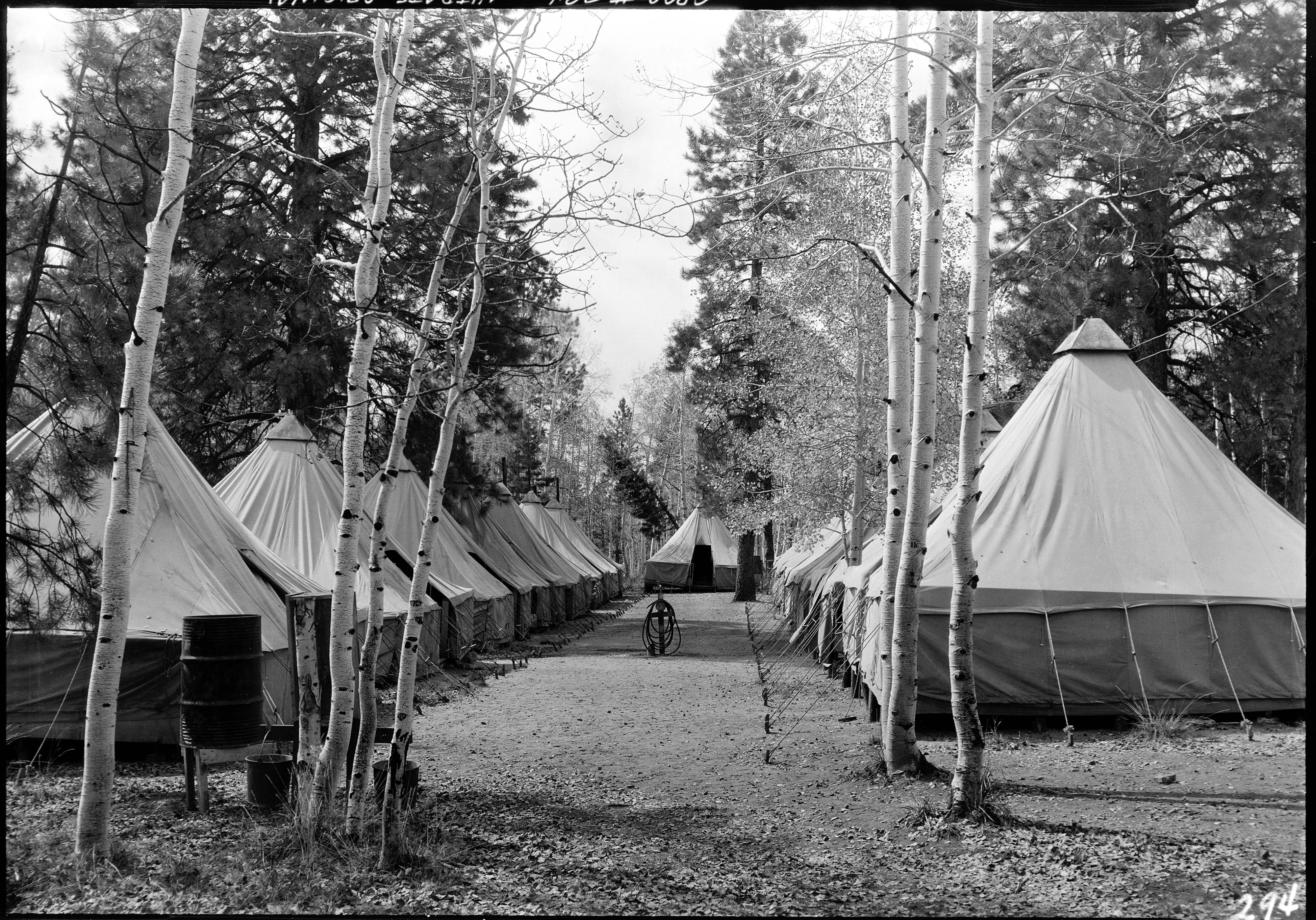 Other CCC projects included the construction of the Clear Creek, Ribbon Falls, and Upper Ribbon Falls trails, installation of the rest houses along the Bright Angel Trail, and construction of the trans-canyon telephone line connecting the North and South rims.  CCC crews also aided in rescue and fire fighting operations, with a total of seven different companies (in addition to companies 818 and 819, companies 847, 2543, 2833, 3318, and 4814) working in the Grand Canyon over the years. ~ See the Company 847 Yearbook from 1936 here (PDF 4.04 MB).