European exploration of the Grand Canyon area began with Spanish expeditions in the 16th and 18th centuries.  US Military expeditions followed, as did exploration by miners and adventure-seekers.  Entrepreneurs, including the Kolb brothers, Verkamps, and the Fred Harvey Company, followed, leading to the first permanent settlement of the South Rim by Euroamericans.

The first European expedition to reach the Grand Canyon was that let by GarcÍa de Cárdenas.  Dispatched from New Mexico By Francisco Coronado to see the arid-land river they’d learned of from the Hopi people, de Cárdenas, the two members of his party, and their Hopi guides reached the South Rim of the Grand Canyon in September, 1540.   The Spaniards attempted the descent from rim to river, but finding no passable route, returned to New Mexico having never having touched the Colorado.

Spaniards did not return to the Grand Canyon until more than 200 years later, when Francisco Garcés reached the western Grand Canyon in 1776 while traveling from Arizona to California. Garcés entered the canyon on what is now the Hualapai Trail in Havasu Canyon, and was the first European encountered by Havasupai people.

The same year, a separate expedition led by Spanish priests Francisco Atanasio Domínguez and Francisco Silvestre Vélez de Escalante reached the Grand Canyon after turning back to Sante Fe when poor weather prevented them from completing their journey via southwest Colorado and Utah to missions in California.

Rather than retrace their path, the expedition cut south into Arizona, where it was faced with crossing the Colorado River.  The party attempted a crossing at what is now Lees Ferry, but finding the task too dangerous, traveled back into lower Utah to make their crossing at a point now drowned in the modern Padre Bay area of Lake Powell. 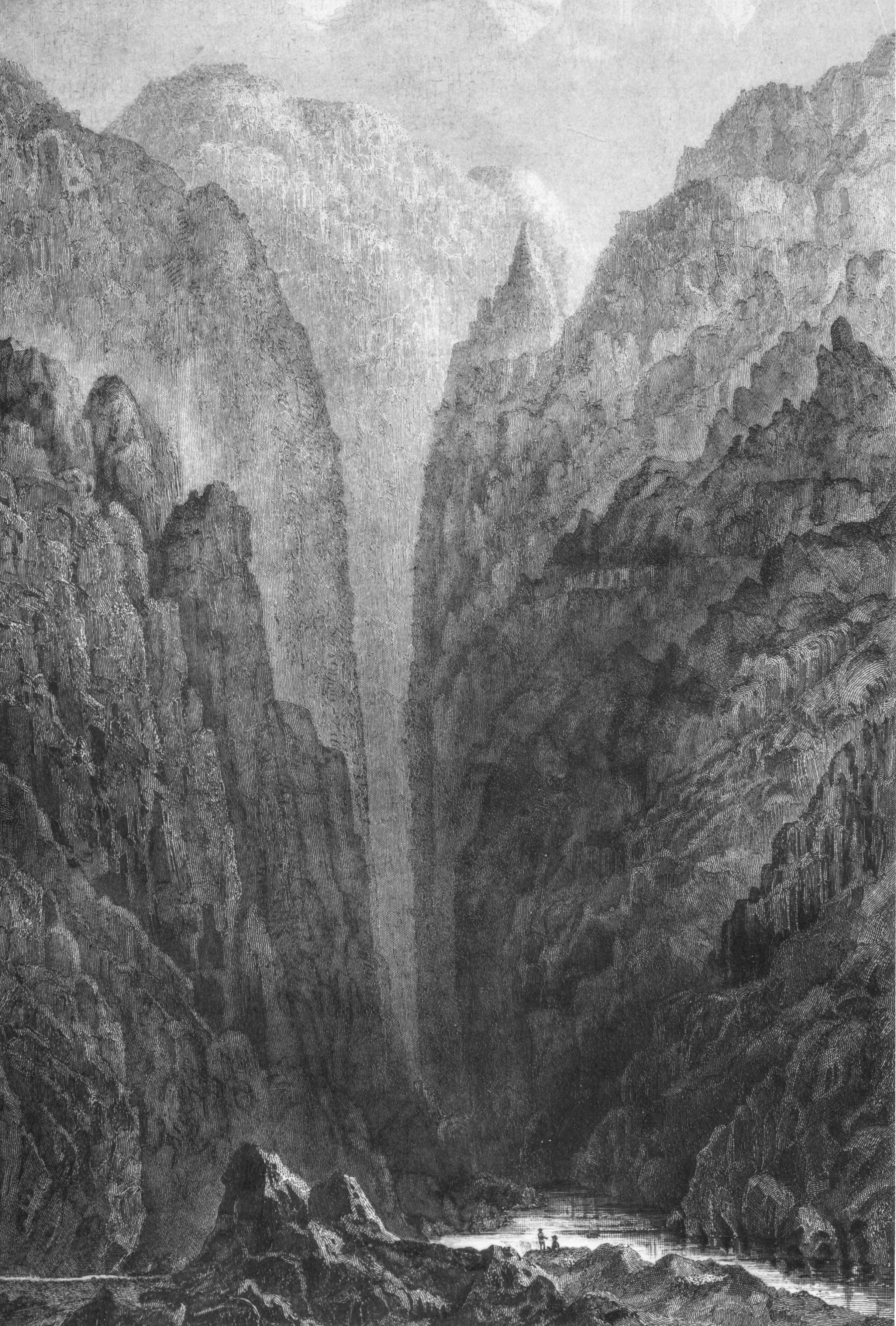 In 1857-1858, Lt. Joseph Ives attempted to navigate the Colorado River by steamboat, traveling upriver from the river’s delta.  He crashed just below Black Canyon (pictured to left), but continued by skiff for an additional 30 miles, and then on foot until he reached Diamond Creek in what is today part of the Hualapai reservation in the Grand Canyon.

Within just over a decade of Lt. Ives’ expedition, John Wesley Powell set out to explore the Colorado from the north.  Leaving Green River, Wyoming in 1869, Powell and his party traversed the Green and Colorado rivers, reaching the mouth of the Virgin River after nearly 930 miles of river travel.  Powell then outfitted a second trip in 1871-1872, during which the first maps and photographs of the Grand Canyon were generated.

One member of the second journey was Powell’s first cousin “Clem,” who kept journals documenting his experience throughout  (read one here).  A portion of one of the boats used on both Journeys—the Nellie Powell, which was abandoned in Lees Ferry during the second trip and later almost lost entirely to a brush fire— is also preserved at Grand Canyon National Park. Learn more… 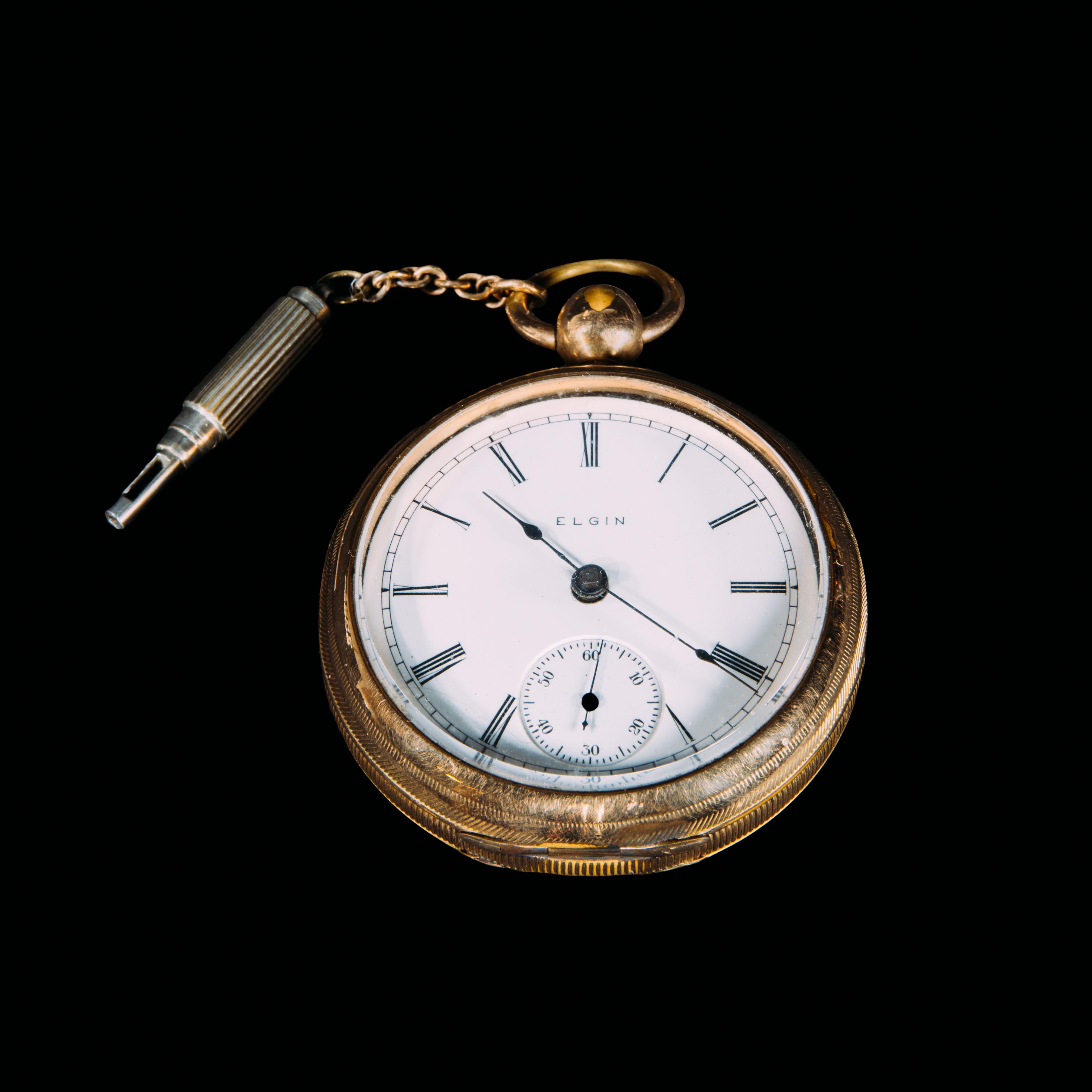 Prospectors began to enter the Grand Canyon area in the 1890s, and within only three years the first full-scale mining operation—Hogan Mine, which later became the Orphan Mine—was pulling copper from the Grand Canyon 1,000 feet below Maricopa Point.

The mine was owned by Dan Hogan, who in 1936, opened the Grand Canyon Trading Post.  In 1946, Hogan sold both his businesses to Madeleine Jacobs, who sold the mine to Golden Crown Mining Company after it was discovered it was rich with uranium.  While in operation between 1953 and 1969, the Orphan Mine was one of the most productive uranium mines in the region. 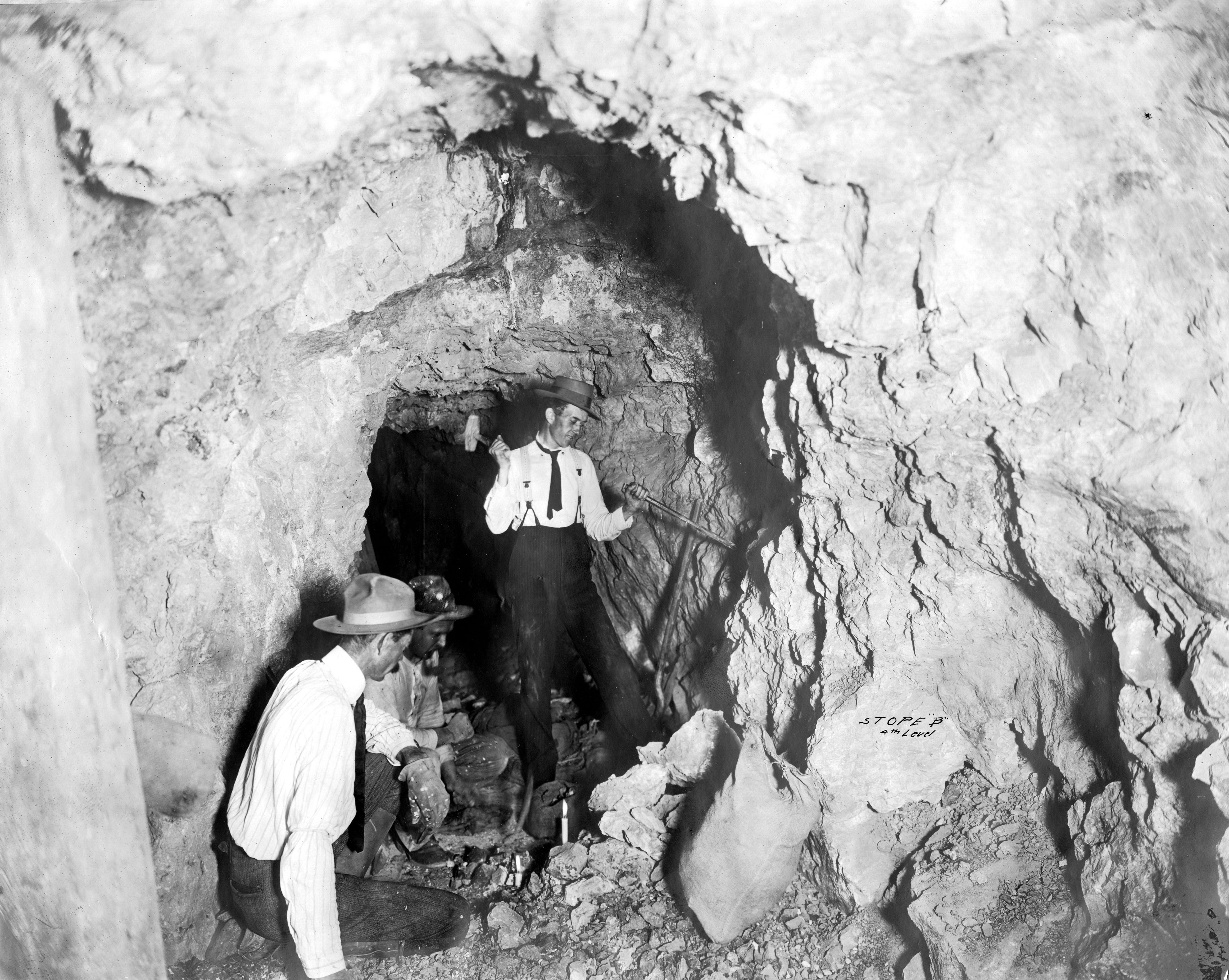 Another of the early miners to enter the Grand Canyon was Pete Berry, who with his partners Ralph and Niles Cameron, found some of the purest copper in the Grand Canyon on Horseshoe Mesa.  The team registered their claim as Last Chance Mine, and built today’s Grandview and Bright Angel trails.  Berry and his wife also opened the Grandview Hotel in 1867, which was successful until the railroad arrived in 1901, bringing with it the El Tovar hotel. 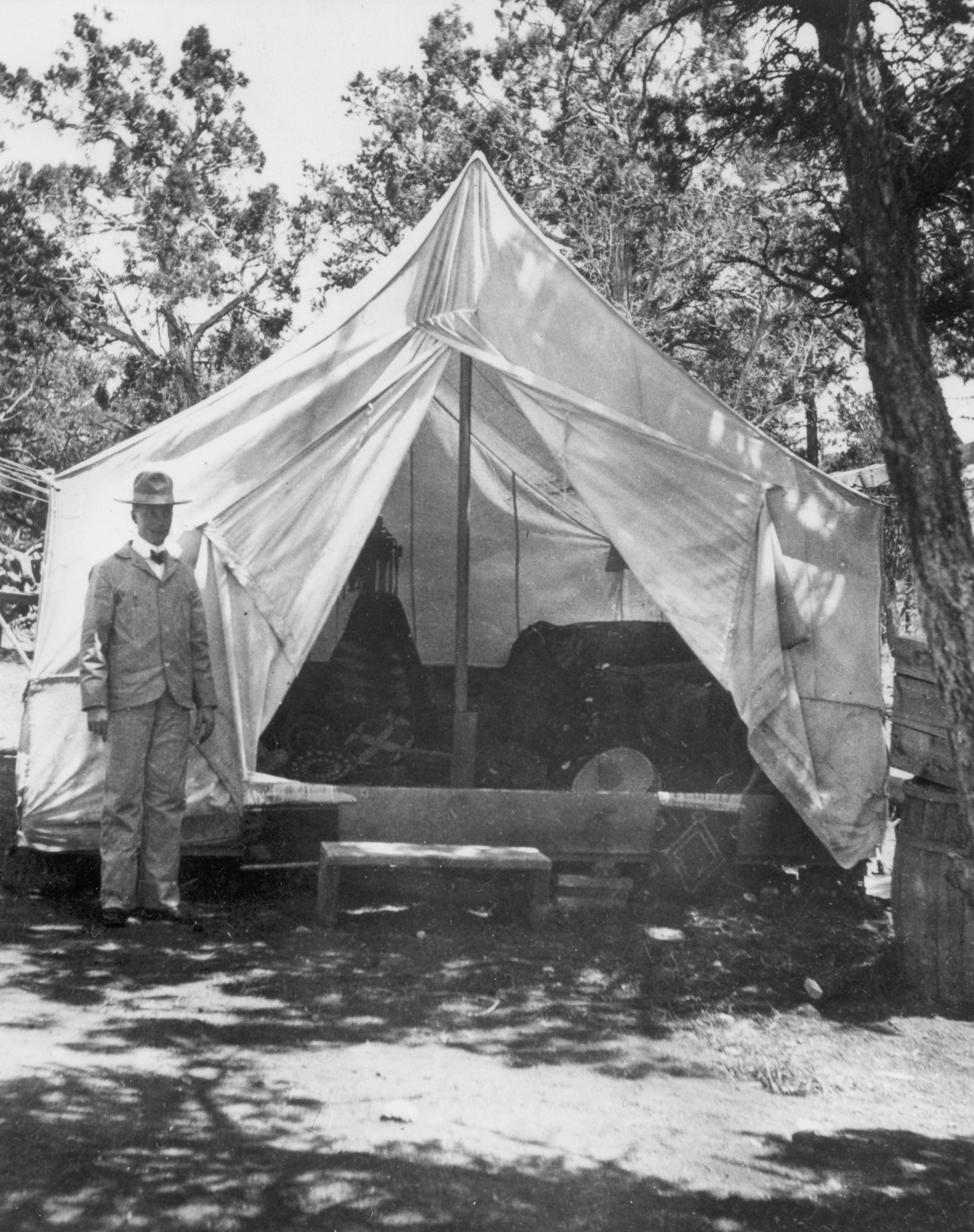 In 1897-1898, John George Verkamp opened the first Grand Canyon curio shop, consisting at that time of a tent from which he sold Native American crafts and souvenirs (shown to the right, ca. 1897).

With few tourists, his first enterprise lasted only a few weeks, but following the arrival of the Santa Fe railroad in 1901 and later construction of the El Tovar hotel on the South Rim, Verkamp returned, building Verkamp’s Curios, which was completed in 1906. The Verkamp family closed the store in 2008, after just over 100 years of being in business. The building is now a National Park Service visitor contact station and museum. 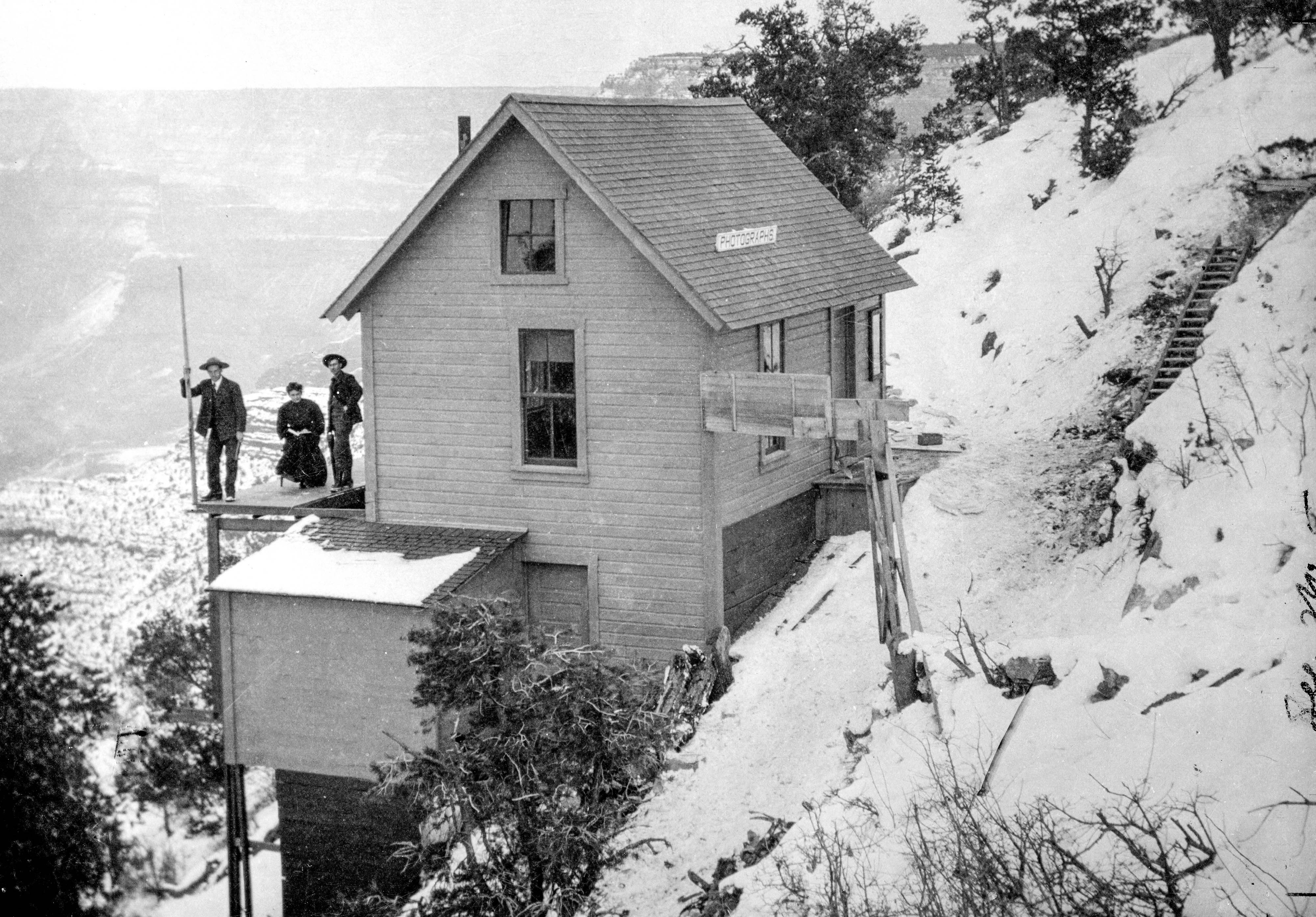 The Kolb brothers—photographers and adventurists—were some of the first permanent Euroamerican residents of the Grand Canyon.  In 1904, the brothers built Kolb Studio, which sits on the edge of the South Rim near the head of Bright Angel Trail.

The brothers gained fame for their photography and for making the first motion picture film of river-running the Grand Canyon.  Learn more…

The film was shown daily at the studio for more than 60 years and can now be viewed courtesy of Northern Arizona University’s Cline Library.

In 1901, prior to his death, Fred Harvey convinced the Santa Fe railroad to run a line from Williams to the Grand Canyon, and in 1905, the El Tovar Hotel, designed by Charles Whittlesey, opened at the end of the line on the South Rim. 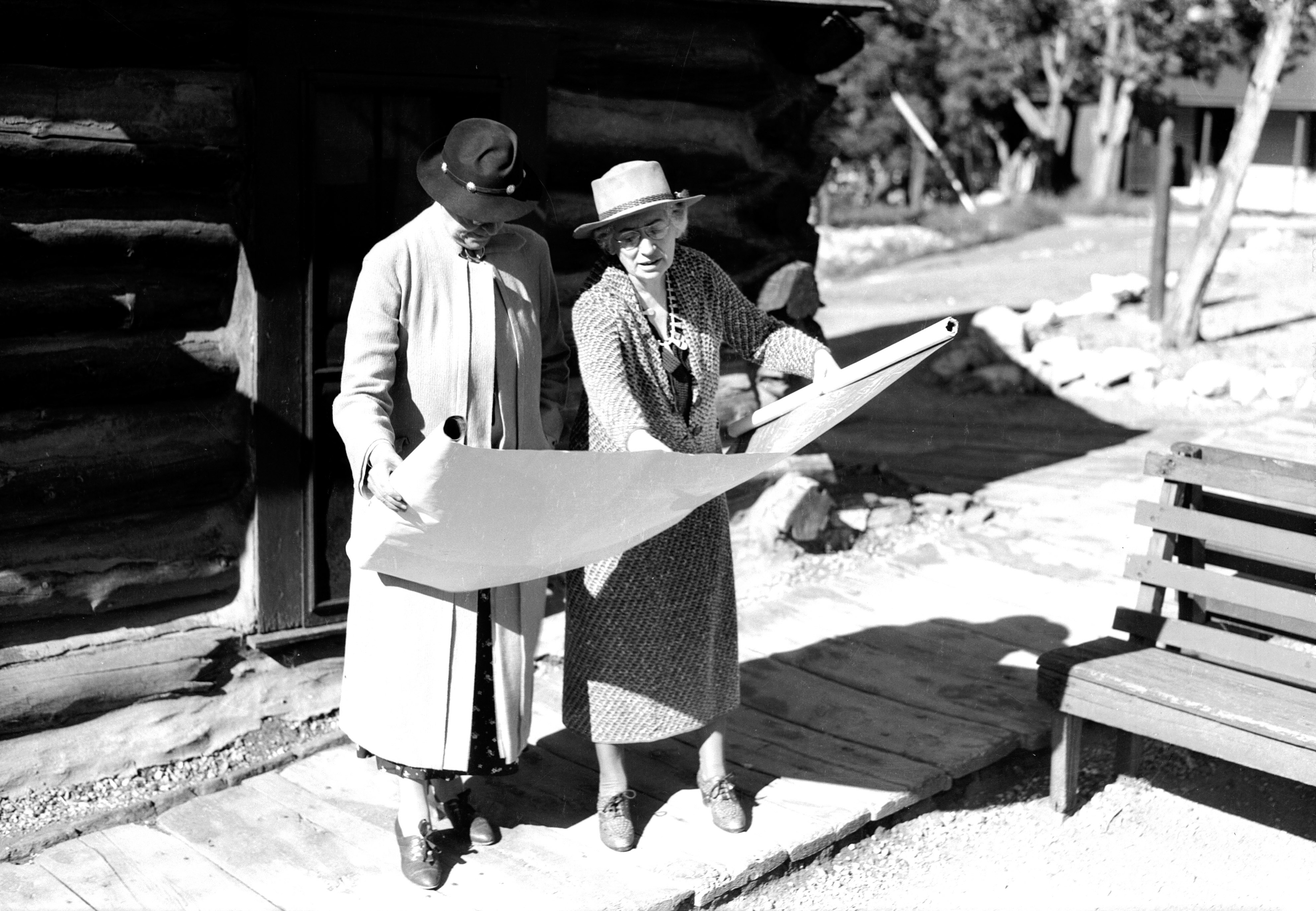 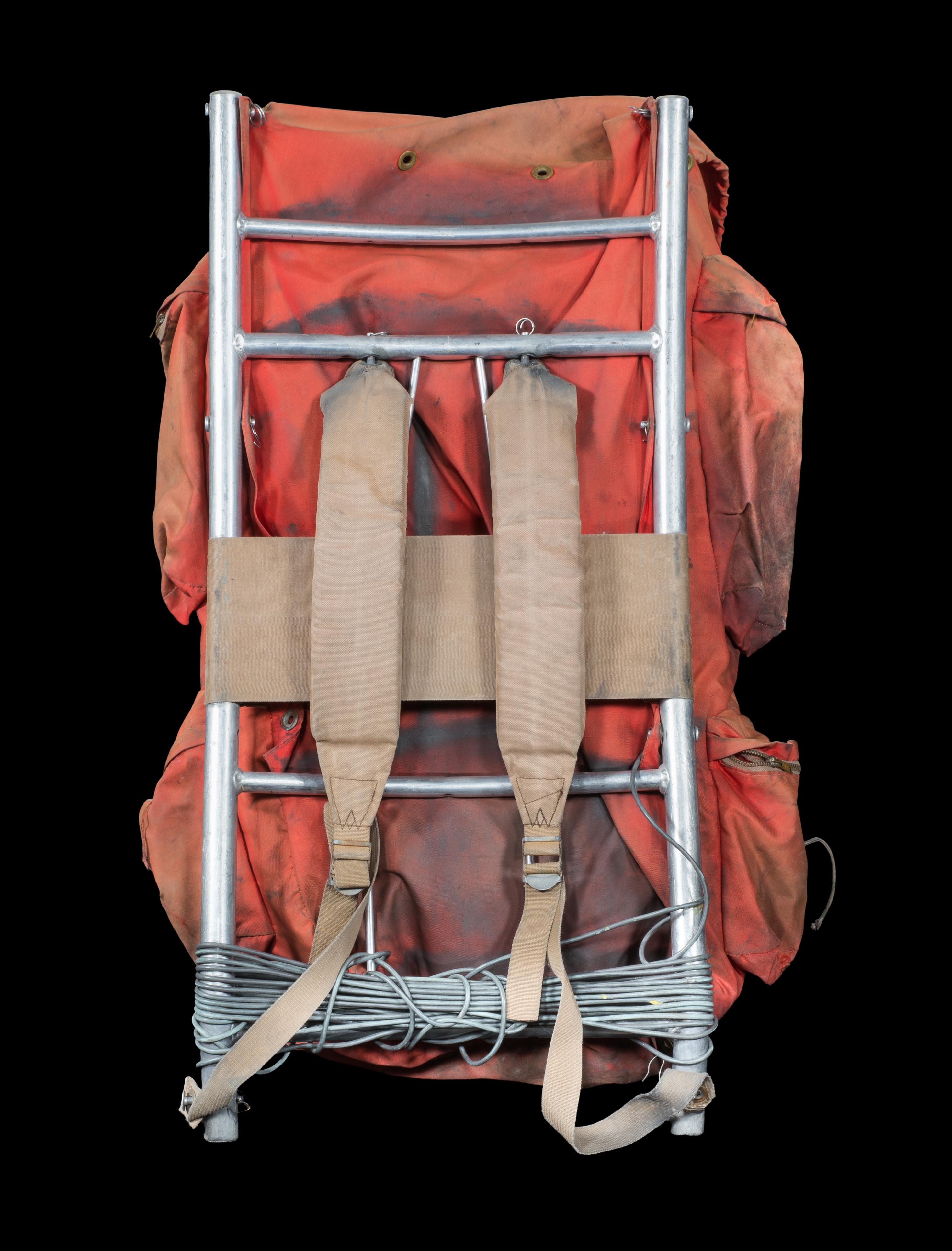 In the years following, Butchart logged over 12,000 miles in the Grand Canyon. He discovered more than 100 rim-to-river routes and made 25 first ascents within the Canyon. His routes also collectively allowed travel through the canyon from Lees Ferry to Havasu Canyon, with Butchart the first first to hike the whole of Grand Canyon. Butchart kept thousands of pages of notes and took a similar number of photographs, and wrote a trilogy of books that were later re-released as a single volume called Grand Canyon Treks: 12,000 Miles through the Grand Canyon. For many of the routes, Butchart’s books and maps are the only reference.

Over the years, Butchart also floated most of the Colorado River on a small air mattress, which served double-duty for camping and for crossing the river, and despite several broken bones and other injuries, was only air-lifted out of the canyon once after a bad fall in 1967.

Harvey Butchart made his last Grand Canyon hike in 1987 and passed in 2002.  Both Butchart’s Butte and a fault line in the Redwall below Enfilade Point are named in his honor. Butchart donated his logbooks and maps to the National Park Service, along with his hiking gear.